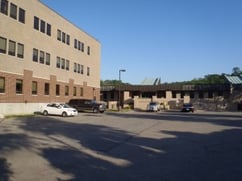 The Metropolitan Sewer District of Greater Cincinnati serves the wastewater removal and treatment needs of Hamilton County, Ohio. The Sewer District uses a variety of vehicles and equipment, including vans, bulldozers, cranes, service trucks and cars. Operation of the equipment involves a total of 180 keys, used as needed by the district’s 150 or so employees. 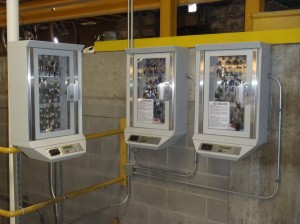 Keeping Up With Keys

A KeyWatcher® key control and management system makes it possible to keep up with the keys. Three cabinets are located side-by-side on a catwalk in the Sewer District’s large garage. The garage operates 24 hours a day, seven days a week, so employees have access to the cabinets anytime, including the middle of the night. Three additional boxes are located elsewhere in the department – one in the maintenance shop, one in another wing of the building and one in the mechanics’ area.

Each cabinet has a capacity of 48 keys, organized by group: one cabinet is set up for customer service, another for repair, a third for inspection and cleaning, and a fourth for heavy equipment. About 150 employees have access to the keys, although some keys are restricted to individual employees or small groups. Employees access the key control system by scanning their employee ID badge/access card, which has an embedded RFID chip. 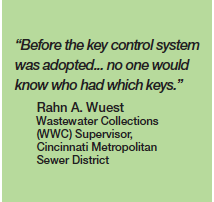 “Before the key control system was adopted, keys were stored on a pegboard in the Sewer District with spare keys kept in a box,” said Rahn A. Wuest, Wastewater Collections (WWC) Supervisor of Cincinnati’s Metropolitan Sewer District. “Theoretically, supervisors kept a log of who took what keys, but the system was not accurate and didn’t work very well. Employees would often take keys home or put them in a locker, and no one would know who had which keys.”

The KeyPro III software is programmed to assign SmartKey rings to a vehicle number. The software tracks the keys and sends emails when a key has not been returned. It also handles assigning several vehicle keys to a limited number of employees who have access; most vehicle keys can be accessed by any employee. The system is set up to send an email if a key is kept out of the box for more than 20 hours. 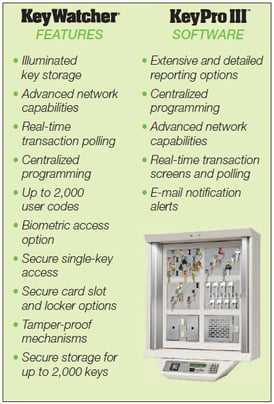 Reports supplied by the software can list how often a vehicle is being used, along with who’s using what equipment. The system can also tell who was driving a vehicle at a certain time, which is helpful information if there is a report of a district vehicle speeding or running a traffic light. If someone is looking for an available vehicle, it’s easy to jump on the system and see what’s not in use. 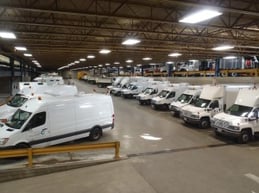 Now there are fewer lost keys in the District, with no need to put spare keys into service. People are still assigned “ownership” of the vehicle they use most of the time, but if there is a call in the middle of the night, the vehicle is available to be used by someone else.

The District’s many keys are easier to access and control now with the KeyWatcher system in place – making work easier and more convenient for employees while keeping vehicles and equipment safe and secure.