The scalability of the Morse Watchmans key management solution installed at Ohio University in Athens has enabled security management to add six KeyWatcher® cabinets to their system. The expansion allows for all of the key control cabinets to be on the school’s IT network for ease of management, efficiency and security. “I was comfortable with the user friendly interface and software of the Morse Watchmans system as well as its reliability,” said Matt Smith, Access Control Manager, Ohio University. “It was a definite bonus that we could add on to the existing system without any complications or major alterations.” 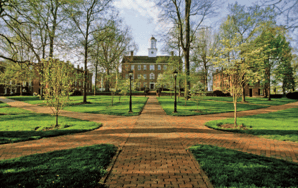 Before installing the original key control system, which utilized Morse Watchmans’ KeyBank®, University maintenance and custodial employees carried several could remove and for how long. Now, all master keys utilized by Facilities (Academic & Research different master keys in order to complete their assigned tasks. It was often a challenge for management to ensure that the keys were not transferred to others, misplaced or simply not returned if an employee left their position at the University. With the installation of the KeyBank storage system and later the KeyWatcher system, management gained con trol of who could remove keys, what keys they Facilities and Residence Halls) are maintained in the KeyBank and removed as needed by authorized personnel.

“The school’s overall security has been upgraded since KeyBank and KeyWatcher have eliminated the need for an employee to carry multiple high-level keys around with them at all times,” said Mr. Smith.” With keys secured in the tamper-proof cabinet when not in use, we have lessened our exposure to the potential security risk of multiple high level or master keys for our facilities being carried on personal key rings.”

The automated key control system has also made it easier to audit who accessed keys and when. Previously, Mr. Smith noted that monitoring who removed keys to access a specific area would have taken hours of searching through manual logs. Now, by running a report, he can determine who accessed a certain key/ space and when it occurred.

“I appreciate the peace of mind and the convenience that the Morse Watchmans solution provides,” he said. “I know that at any time I can run a report and determine who is currently using keys and how long they have had them signed out. I know that all keys are secured in a tamper resistant cabinet within a secure location which is also access controlled.”

Product reliability and after sales customer service were also cited by Mr. Smith as further considerations for adding to the existing system. He says, “Maintenance on the system is minimal and we are very satisfied with its reliability. Both the sales representative and the service department are highly professional and efficient and know the system thoroughly.”

Established in 1804, Ohio University is the oldest public institution of higher learning in the state of Ohio, and the first in the Northwest Territory. Ohio University has 17,124 undergraduate students on the Athens campus, more than 250 undergraduate programs, 970+ full time faculty (Athens campus), and 42 residence halls housing 7,800+ students. It is currently ranked first in the State of Ohio for nationally competitive awards won by its students.